To share your memory on the wall of Anthony Fink, sign in using one of the following options:

Tony was a Jack-of-all-trades and worked as an appliance repairman, a skilled maintenance worker for a large apartment business and fancied himself a race car driver while driving taxi and, most recently, as a deliver man for Schultz’s Pharmacy.

Tony enjoyed gardening, camping, playing cards, going to the movies with family and friends and the occasional visit to the casino. Tony had the gift of gab and will be remembered for being very thoughtful, kind-hearted, and beloved by many. When you needed Tony, he was always there to lend a helping hand.

Tony is survived by his brother, John Fink; sister, Stephanie (Joseph) Nichols; and aunts, uncles, nieces, nephews, cousins and many friends. He was preceded in death by his parents; and brother, Mark Fink.

A private family service will be held at a later date.
Read Less

Receive notifications about information and event scheduling for Anthony

There are no events scheduled. You can still show your support by sending flowers directly to the family, or planting a memorial tree in memory of Anthony Gerald Fink.
Plant a Tree

We encourage you to share your most beloved memories of Anthony here, so that the family and other loved ones can always see it. You can upload cherished photographs, or share your favorite stories, and can even comment on those shared by others.

Posted Apr 10, 2020 at 08:01pm
Our sincere sympathy to all Tony's family and friends. He had a kind soul, like a loving teddy bear. Remember that death can not sever, love and remembrance will last forever.
Comment Share
Share via: 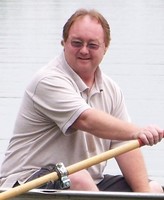