To share your memory on the wall of Arley Pomplun, sign in using one of the following options:

On March 2, 1963, Arley married Patsy Rosanske and she preceded him in on May 14, 2003. Together they farmed for many years and Arley loved to work the land with his John Deere tractor. In his early years, Arley was employed at Speed Queen in Wautoma and later retired in 1993 from Morgan Doors in Oshkosh. Not one to sit still, Arley went to work for the Omro Community Center for several years. He enjoyed gardening, taking trips, polka music, and reading western books. Of all these things, Arley’s greatest joy was the love of his children and five grandsons.
Survivors include his children, Carla Pomplun, Karen Pomplun, Lisa (Joe) Linder, and Earl (Jody) Pomplun; his grandsons, Travis (special friend, Ally), Derek, and Brady Pomplun; Conner and Cole Linder; a brother, Gaylord Pomplun; a sister, Judy Young; a sister-in-law, Esther Rosanske; many nieces, nephews, other relatives, neighbors, and friends. Arley is also survived by a special friend, Marian Heller. Preceding Arley in death is his wife; a son, Lee; his parents; his in-laws, Arthur and Ada Rosanske; two sisters, Inez and Mabel; and three brothers, Darwin, William, and Tony.

Funeral services will be held on Thursday, May 16, 2019, at 2:30 p.m. in Kwiatkowski Funeral Home, 425 Jefferson Ave., Omro. A time of visiting and sharing of memories will be held on Wednesday from 5:00 to 7:00 p.m. and on Thursday from 1:30 p.m. until service time at the funeral home. Arley will be laid to rest next to Patsy at the West Holden Cemetery near Wautoma.

The family would like to thank Dr. Chris Rocke and his staff for the excellent care given to Arley; to Agnesian Hospice of Hope and Home Instead staffs, especially Shirley, for allowing Arley to remain at home; to Dr. Beem and staff of Omro Chiropractic and Gentlemen’s’ Choice Barber for their special accommodations on Arley’s behalf; to Ken and his staff at Omro Pharmacy, many thanks; and to neighbor, Beth, for being there to help, thank you more than words can say.
Read Less

To send flowers to the family or plant a tree in memory of Arley Albert Pomplun, please visit our Heartfelt Sympathies Store.

Receive notifications about information and event scheduling for Arley

We encourage you to share your most beloved memories of Arley here, so that the family and other loved ones can always see it. You can upload cherished photographs, or share your favorite stories, and can even comment on those shared by others.

Posted May 20, 2019 at 09:38am
My condolences to the family. Please be comforted by the Bibles promise of the resurrection. John 5:28,29, Acts 24:15.
If you would like to learn more about the wonderful promises in the Bible, please visit jw.org.
Comment Share
Share via: 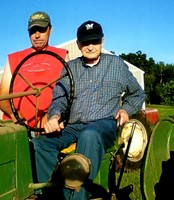