To share your memory on the wall of Cecilia Davidson, sign in using one of the following options:

It is with heavy hearts and slight sighs of relief for her to breathe easy, that we say our earthly goodbyes to our Beloved Mom, Mother-in-law, Aunt, Grandma, and Great Gr... Read More
Cecilia Ann Davidson, Age 96, July 19th, 1924-October 8th, 2020.

It is with heavy hearts and slight sighs of relief for her to breathe easy, that we say our earthly goodbyes to our Beloved Mom, Mother-in-law, Aunt, Grandma, and Great Grandma D.

Born in Phillips, Wisconsin to Helen (Samer) and Andrew Bruckbauer, Cecilia was the first daughter born after four brothers (Andrew, David, Robert and John) soon to be followed by four more siblings (Philip, Rosemary, Frances and Helen). Cecilia, “Ceil” or “Sis” as they called her, was the last surviving sibling.
Growing up in a modest lifestyle taught Ceil many life lessons. She and her siblings relied on each other for support everyday, especially during the Great Depression and World War II. Ceil was an independent woman with a very strong work ethic including graduating from college later in life with her education degree from UWO, the same time as her son Robert. She worked primarily at the high school level with special needs students.

She was very proud to have been involved with the ARC (now known as Arc) for many years, serving on the Board of Directors of the Winnebago County Chapter, later as their President, then honored to be elected as the President of the State of Wisconsin Chapter.
Her craft skills leave us with many pieces of her handiwork, from detailed needlework, knitting and crocheting, to those one of a kind Christmas stockings, all made with love. She and her loving husband Harlan also grew and shared their bountiful garden harvests.

During retirement, they travelled the country. In later years, Ceil and Harlan enjoyed building and spending time with friends and family at their cabin near Mountain, Wisconsin.

She was preceded in death by her son, Jonathan VanderLoop; husbands, Cyril VanderLoop and Harlan Davidson; Harlan’s daughter, Cheri; and her nephew, Dirk Shawver.

Our sincere heartfelt thanks to the kind staff at Park View Health Center, who treated her like family these past years and were with her when we could not be, the past few months and especially these last few weeks. We will never forget your thoughtfulness!

Private family services will be held.

In lieu of flowers memorials may be directed to the Day by Day Warming Shelter.
Read Less

Receive notifications about information and event scheduling for Cecilia

There are no events scheduled. You can still show your support by sending flowers directly to the family, or planting a memorial tree in memory of Cecilia Ann Davidson.
Plant a Tree

We encourage you to share your most beloved memories of Cecilia here, so that the family and other loved ones can always see it. You can upload cherished photographs, or share your favorite stories, and can even comment on those shared by others.

Plant a Tree in Memory of Cecilia
Plant a tree 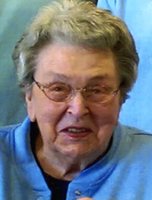