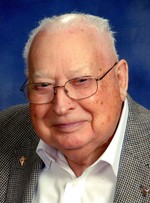 Darwin Carlton Lovell, 91, of Omro died Sunday, March 1, 2020 at Webster Manor, where he had lived for the past 4 ½ years.
Darwin was born Sept. 11, 1928, in Oshkosh, the son of the late Carl and Leora (Breitrick) Lovell, who farmed in the Omro area. He graduated from Omro High School in 1946. He married Eleanor Adams on Sept. 17, 1949, in Omro, where they spent most of their married life. They had been married 59 years when Eleanor died in 2008.
He worked 15 years as an animal husbandry technician for Curtiss Breeders. This was followed by a career in life insurance that lasted almost 40 years. He worked for Metropolitan Life, the Redfield-Lovell agency, and the Thomas Insurance Group, retiring at age 75.
Darwin was an active member of First Presbyterian Church of Omro, which he joined in 1946. He taught Sunday School, served as head usher for many years, and was on Session and various Winnebago Presbytery committees.
He was involved in the community for years. He was a long-time member of the Omro Kiwanis Club. He served on the Omro City Council and the Winnebago County Board, and the boards of the Omro Community Center, Salvation Army, Berlin Hospital, Omro Area Development Corp., and the Union Junction Cemetery. He also was a proud member of the Red Cross 16-Gallon Club.
Darwin’s interests were varied. He enjoyed golfing, pheasant hunting, and square dancing. He also liked to travel. He and Eleanor visited 49 of the 50 states (only missing Hawaii), much of Canada, and many European countries. Here in Wisconsin, he loved spending time with Eleanor, family, and friends at the Lovell cottage in Hazelhurst. Darwin also enjoyed his daily stops to either the truck stop, 4 Corners, Jackie’s, LaSure’s, Hardees or McDonalds.
Darwin is survived by 3 sons: Kevin (Kay), of Wausau, Randy (Tracey) of Oshkosh, and Alan of Columbia, SC; 6 grandchildren: Jaclyn Lovell (Geoff), of Brooklyn, NY, Lindsay Lovell (Jeff) of Omro, Christopher Lovell (Jackie) of Mamaroneck, NY, Ryan Lovell (Katie) of Libertyville, IL, Anne Lovell (Kevin) of St. Paul, MN, and Kurt Lovell (Chelsea) of Germantown; 3 great-grandchildren: Elise and Charlotte Lovell of Libertyville, IL, Noah Adelmeyer, of Omro; and one to be born in Germantown in July.
He is further survived by one brother, Merlynn Lovell (Dorothy) of Omro; a brother-in-law, Harlin Adams (Lorraine) of Byram, MS; an aunt, Doris Strehlow of Omro; other relatives and many dear friends.
Funeral services for Darwin will be held at 12:00 p.m. on Saturday, March 7, 2020 at the First Presbyterian Church, 955 N. Webster Ave., Omro with Rev. Travis Shafer officiating. Visitation will be at the church from 9:00 a.m. until the time of service. Darwin will be laid to rest in the Omro Junction Union Cemetery. Memorial funds will be established for the First Presbyterian Church and Omro Junction Union Cemetery.
The family would like to sincerely thank the staff of Webster Manor, Heartland Hospice, and Dr. Ben Heinzen for their loving care.