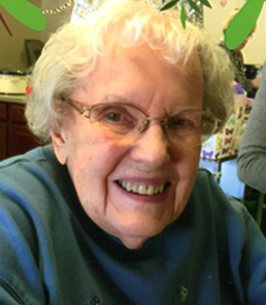 Share this tribute
Memorial Candles Lit for Dorothy | SEE ALL
Light a Candle
"We are honored to provide this Book of Memories to the family."
— Kwiatkowski Funeral Home
Funeral Details Memory Wall Photos & Videos Send Flowers

Print
Dorothy R. Beebe, age 92, passed away on Tuesday, November 6, 2018. She was born on February 8, 1926 the daughter of the late Theodore and Ethel (Jannusch) Fritz. She was united in marriage to Almond Beebe on April 27, 1946, in Berlin, WI. They lived on a farm near Omro for several years before moving to Omro. She was a long-time member of First Presbyterian Church and served as Secretary/Treasurer for 26 years. Dorothy always liked to sing and play guitar for others to enjoy. Visits from grandchildren and great-grandchildren were very much appreciated. Having a great-granddaughter named after her was an honor.

The memorial service will at 11:00 a.m. on Saturday, November 10, 2018 at FIRST PRESBYTERIAN CHURCH, 955 N. Webster Ave., Omro, with Rev. Travis Schafer officiating. Friends will be received at the church from 9:30 a.m. until the time of the service. Burial will be at a later date in Waukau Cemetery. Memorials in Dorothy’s name may be given to First Presbyterian Church.

We encourage you to share any memorable photos or stories about Dorothy. All tributes placed on and purchased through this memorial website will remain on in perpetuity for future generations.

Dorothy's loving Brother, Theodore Carlton Fritz and his extended family, celebrate Dorothy's wonderful life that enriched so many. We all treasure the precious time we shared together. We're pleased that Dorothy's spirit lives on in the many who survive her. This tree is dedicated as a living memorial, to honor her life and her spirit and as a reminder to all to aspire to the heavens in everything they do. May God bless her soul and all those she loved.
Theodore Carlton Fritz and Family - Sunday November 11, 2018 via Memorial Tree
1
Page 1 of 1
Share
×