To share your memory on the wall of Florence King, sign in using one of the following options:

She was born on September 25, 1922 in the Town of Rushford. Florence was the fifth of seven children born to Frank and Maggie (Maslowski) Kal... Read More
Florence King, 97, a lifetime Omro resident, died at Park View Health Center on April 9, 2020.

Florence’s family wishes to extend a special thank you to the staff at Park View for the care and support given to her and her family.
Read Less

To send flowers to the family or plant a tree in memory of Florence Ann King (Kallas), please visit our Heartfelt Sympathies Store.

Receive notifications about information and event scheduling for Florence

We encourage you to share your most beloved memories of Florence here, so that the family and other loved ones can always see it. You can upload cherished photographs, or share your favorite stories, and can even comment on those shared by others.

Posted Apr 13, 2020 at 02:58pm
I visited the Omro Cemetery on Saturday before Easter and happend to see her headstone and wondered about her , now I know .
Always a good neighbor and family friend !
Comment Share
Share via: 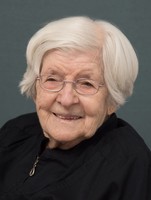