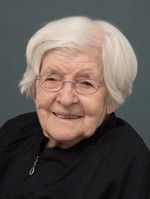 Florence’s family wishes to extend a special thank you to the staff at Park View for the care and support given to her and her family.