To share your memory on the wall of James Bradley, sign in using one of the following options:

Print
Jim passed away on April 26, 2019, at age 82 after a brief hospitalization. He was born to Job and Nellie Bradley on January 30, 1937 in Waukau, Wisconsin. On August 23, 1958, Jim married Lola Bartel, the daughter of Frank and Norma Bartel.
Ji... Read More
Jim passed away on April 26, 2019, at age 82 after a brief hospitalization. He was born to Job and Nellie Bradley on January 30, 1937 in Waukau, Wisconsin. On August 23, 1958, Jim married Lola Bartel, the daughter of Frank and Norma Bartel.
Jim graduated from Omro High School in 1955. He was a gifted athlete who excelled in track, having earned gold medals at State during both his Junior and Senior years.
Immediately after high school graduation Jim enlisted in the Air Force where he served for 20 years. He began his AF career as a flight mechanic on a B-47 Bomber with the Strategic Air Force Command and was soon promoted to crew chief and was twice chosen as Maintenance Airman of the Month and Outstanding Airman of the Quarter. While serving with SAC, Jim had temporary assignments of three months each in both England and Spain.
In 1964 Jim applied for reassignment to a new career field and was accepted for Flight Crew training as a Flight Engineer with the Military Airlift Command (MAC). He was initially assigned as a Flight Engineer on the C-124 Globemaster (a four-engine prop plane affectionally referred to as "Old Shaky"). During this time, he served temporary three-month deployments to Germany on three different occasions.
In late 1969, Jim received training on the C7 Caribou aircraft in preparation for a one-year deployment to Viet Nam where he was stationed at Vung Tau and Cam Rahn Bay. This aircraft was designed to fly personnel and supplies into small forward bases. During this time Jim was awarded a Distinguished Flying Cross for participation in a June 19, 1970, tactical emergency mission delivering badly needed ammo to a forward operating camp that was under attack and was exposed to lengthy hostile fire.
Jim was also selected to serve on the crew that took part in SEATO (Southeast Asia Treaty Organization) exercises in Bangkok, Thailand.
Upon his return to the states, Jim received training on the C-141 Starlifter aircraft and served as Flight Engineer on this aircraft until his retirement in 1975, having attained the rank of MSgt. During this time Jim was part of a select crew to serve the National War College on their tour to several countries in the Mideast, including Morocco, Israel, Jordan, Saudi Arabia, India, Pakistan, Afghanistan, Iran, Egypt, and Spain. Jim's duties as a Flight Engineer required him to be gone from home for periods of a week or more at a time as their mission was to deliver personnel and supplies to many of our bases in foreign lands. Countries that he visited (many of them multiple times) included Bahamas, San Salvador, Antigua, Labrador, Germany, Spain, England, France, Norway, Libya, Thailand, Morocco, Italy, Wake Island, Greenland, Azores, Phillipines, Iceland, Kwajalien (an island), Greece, Turkey, Brazil, Trinidad, Japan, and Iceland. Jim had many tales of adventure to tell about these trips including one trip where he was the Engineer on a plane flown by Col. Beaulieu (the father-in-law of Elvis Presley).
Upon his retirement from the AF, Jim worked as a carpenter, both self-employed and for his brother-in-law. He also worked on building family homes in Waukau, Richford, and Mosinee area. Although Jim was not a "licensed" plumber or electrician, he was skilled in both and did much of this work on our personal dwellings. He also did a lot of volunteer carpentry work at both our church and as a member of the Building Committee for the Richford Community Center.
Jim was a very involved father and grandfather and spent much time on camping and fishing trips with both sons and grandsons. Both Jim and his wife Lola were very involved with the athletic endeavors of grandsons Jim and Dillon, and with sons Bruce and Ken. They also went on many jaunts mostly within the states of Wisconsin, Michigan and Minnesota, but also enjoyed trips to Texas, Nebraska, Arkansas and other western states. In later years Jim was not physically able to partake in many of these activities and he and his wife moved to a senior community in Oshkosh, WI.
Jim is survived by his wife, Lola, sons Kenneth (Sherrie) Bradley of Alanson, Michigan and Bruce (Linda) Bradley of Merrill, WI. He is also survived by a brother Richard (Lois) Bradley of Hot Springs Arkansas, and a sister Delores (Leon) Quigley of Winneconne, WI. He is also survived by Grandsons Dillon Thomas (fiance Brenna) Bradley of Alexandira, VA, and James Michael (Jenn) Bradley of Jacksonville, FL, and great grandson Jackson Reed Bradley. Also step-grandchildren Katie (Eric) Morell, Michael (Casey) Bradley, Jackson Bradley, Jordan Bradley, Jennifer Lloyd, and Ted Shields. Step great grandchildren Emmett Morell, Michaela, Aydren, and Emmaleigh Bradley. He is also survived by sister-in-law Frances and her husband Larry Lorentzen of Kearney, NE, Brother-in-law Norman and his wife Patricia Bartel of Omro, WI, and Brother-in-Law Roger and his wife Carol of Conroe, TX. Also surviving are many cousins, nieces, and nephews.
He was preceded in death by his parents, Job and Nellie (Bartol) Bradley, Father in Law Frank (Norma Meyer) Bartel, and three brothers, Laurence (as an infant), Clifford, and Daniel Bradley.
Visitation will be at Grace Lutheran Church 720 Jackson Avenue Omro, Wisconsin from 10:00 AM to noon on Saturday, May 4, 2019 with a service immediately afterwards.
If you care to make a gift in memory of Jim, a memorial fund has been established for the Salvation Army.
Online condolences may be given www.omrofuneralhome.com.
Read Less

To plant a memorial tree in honor of James Bradley, please visit our Heartfelt Sympathies Store.

Receive notifications about information and event scheduling for James

There are no events scheduled. You can still show your support by sending flowers directly to the family, or planting a memorial tree in memory of James Bradley.
Plant a Tree

We encourage you to share your most beloved memories of James here, so that the family and other loved ones can always see it. You can upload cherished photographs, or share your favorite stories, and can even comment on those shared by others.

Posted May 20, 2019 at 09:39am
My condolences to the family. Please be comforted by the Bibles promise of the resurrection. John 5:28,29, Acts 24:15.
If you would like to learn more about the wonderful promises in the Bible, please visit jw.org.
Comment Share
Share via: 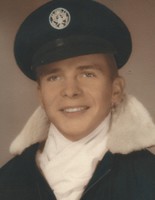