To share your memory on the wall of James Harron, sign in using one of the following options:

His family moved to Oshkosh and Jim graduated from Oshkosh High School in January of 1951. After high school, he did a short stint at the Oshkosh Teacher’s College before enlisting in the United States Marine Corps, something that he and a high school buddy had committed to when the U.S. entered the war in Korea.

Jim married Jo Brouchek on August 4, 1956 in Oshkosh. Jim was a butcher, held various sales positions and then returned as a manager of the meat department at Food Queen for many years. He then worked on the behavioral unit at the Winnebago Mental Health Institute and was promoted to Supervisor at the Wisconsin Resource Center, from which he retired in 1995.

During retirement Jim was busy. He won a seat on the Omro City Council in 1995, was an associate member of the Chamber of Commerce, and a Kiwanis member. A proud achievement was the creation of a children’s harmonica band, which he dubbed “The Omro Harmonikits” (a “kit” being a baby fox reflecting the Omro school mascot). He loved the kids and hoped they would continue playing as he did.
Jim loved guns and loaded his own ammunition for his beloved 243 Winchester Model 70 burning powder all year round, both hunting and competing. Jim was an avid motorcyclist, one year travelling to the North Carolina coast and another trip to the coast of Oregon. He bought a Harley in 2002, but suffered a stroke before he put much mileage on it… but just owning a Harley is fun! Perhaps he will do some ‘rumbling’ in his next life!

Jim was preceded in death by his parents, nephew Mike Harron and several aunts and uncles.

The family would like to thank all the staff at Evergreen Retirement Community for their care and attention.

Visitation hours will be available for family and friends on Friday, December 27, 2019 from 9 to 11am at St. Mary Catholic Church, 730 Madison Ave., Omro, Wisconsin. Funeral Mass will follow at 11am; Pastor Doug LeCaptain and Sister Pam Biehl officiating. Burial will be in Omro Cemetery immediately following Mass. Online condolences may be given at www.omrofuneralhome.com.
Read Less

To send flowers to the family or plant a tree in memory of James Clement Harron, please visit our Heartfelt Sympathies Store.

Receive notifications about information and event scheduling for James

We encourage you to share your most beloved memories of James here, so that the family and other loved ones can always see it. You can upload cherished photographs, or share your favorite stories, and can even comment on those shared by others.

DonnaHauber sent flowers to the family of James Clement Harron.
Show you care by sending flowers

Posted Dec 24, 2019 at 12:18pm
My favorite memories of Jim are the long bicycle rides around Lake Winnebago from Oshkosh. Jim got really frustrated as younger riders set a pace we older riders could not possibly match! I would holler "C'mon, Marine!" when I passed him. No mercy, no slack.
Comment Share
Share via: 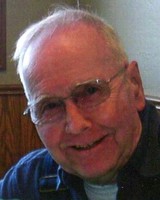