To share your memory on the wall of Richard Kettlewell, sign in using one of the following options:

He was born June 2, 1940 to Rumsey and Clara (Kraft) Kettlewell. He graduated from Berlin High School and attended UW-Oshkosh.

He was born June 2, 1940 to Rumsey and Clara (Kraft) Kettlewell. He graduated from Berlin High School and attended UW-Oshkosh.

Richard worked at Rockwell International for 30 years and was able to retire at the age of 56. He enjoyed hunting, fishing, camping, and playing cards. He married Sandra Tanner on August 28, 1963 and later had three children, Kay (Larry) Stellmacher, Pam Gromnicki, and Mark (Julie) Kettlewell. They shared 51 years of marriage before she passed away on March 10, 2015.

A visitation will be held at Kwiatkowski Funeral Home, 425 Jefferson Ave. Omro, WI on Monday June 14, beginning at 9AM and lasting until the time of service at 11AM. Burial will take place at Shead Island Cemetery following the service.

The family wishes to thank DaVita Dialysis and Doctor Lake for the care Dad had received in the past several years.
Read Less

To send flowers to the family or plant a tree in memory of Richard Daniel Kettlewell, please visit our Heartfelt Sympathies Store.

Receive notifications about information and event scheduling for Richard

We encourage you to share your most beloved memories of Richard here, so that the family and other loved ones can always see it. You can upload cherished photographs, or share your favorite stories, and can even comment on those shared by others.

Sweet Tranquility Basket was purchased for the family of Richard Kettlewell. Send Flowers 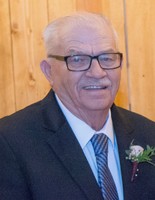