To share your memory on the wall of Roman Bauer, sign in using one of the following options:

Romy tested milk for Winnebago County DHIA and was involved with numerous farm families. He enjoyed volunteering at the Winnebago County Fair, Kumbier’s “Day on the Farm”, and with Winnebago County Jr. Holstein Assoc. He also farmed with his brother, Dave and his family for many years.
Romy was employed at Bemis & Amcor for over 26 years. He felt he was part of the warehouse team.
On Dec. 30, 1993, Romy purchased a Farmette in the Town of Utica. He began raising Peacocks, but now has a windmill by his pond of fish, ducks and swans. Also, a “Stop and Go” light when you first drive in near an old telephone booth, and displays of old hay machinery. If you drive by, you can tell he enjoys life. The last 10 years he took pride in his miniature white, blue-eyed donkeys. He made mailboxes with each donkey’s name on them, also with a 1-horsepower parking area! All Romy wishes is that if you drive by his place that you enjoy the sights and SMILE!

Romy had a cell phone with his family, his neighbors and friends all on speed dial. Thanks for always being available for him.

The family extends a special thank you to Aurora-Oshkosh ICU doctors, nurses and support staff that allowed us to spend time with Romy and support them for all they were doing for him. “God Bless You and Be Safe”.

The immediate family will have a “Celebration of Life” for Romy at a later date.
Read Less

Receive notifications about information and event scheduling for Roman

There are no events scheduled. You can still show your support by sending flowers directly to the family, or planting a memorial tree in memory of Roman R. Bauer.
Plant a Tree

We encourage you to share your most beloved memories of Roman here, so that the family and other loved ones can always see it. You can upload cherished photographs, or share your favorite stories, and can even comment on those shared by others.

Plant a Tree in Memory of Roman
Plant a tree 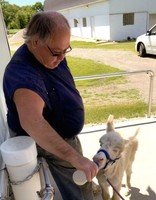