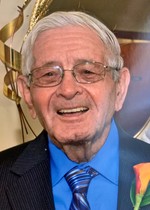 Roy “Jupe” A. Fink Jr., age 86, passed away on Tuesday, November 3, 2020. He was born in Oshkosh on September 18, 1934 the son of the late Roy and Helen (Young) Fink Sr. He was married to Joan Cleveland, who preceded him in death in 2008. Jupe was proud to serve in the U.S. Army. He worked as a cheese maker at Alto Creamery, retiring in 1996. Jupe was known for his woodworking, yardwork and collecting cans. He will be remembered for his kindness and generosity. “Ya Ba Da Ba Doo!”


Jupe is survived by his son: Shawn (special friend, Vickie Colb) Fink and his daughter, Zaynah; and Mike (Linda) Craig and their children Beth and Wendy; step-children: Jill (Steve) O’Mary, Tim J. (Alice) Davis and Pam Davis; numerous grandchildren and great-grandchildren; and sisters: Carol and Sandra. He was preceded in death by his wife, parents; and brothers: Bob Fink Sr, Aaron Fink and Jerry Fink.

A public visitation will be from 10:00 a.m. until 12:00 p.m. on Monday, November 9, 2020 at Kwiatkowski Funeral Home. Burial will be in Eureka Cemetery. CDC guidelines are recommended.