To share your memory on the wall of Danycka Milis, sign in using one of the following options:

Danycka is survived by her parents; sister, Dakota Milis; brother, Drake Milis; bonus siblings: Koral, Kayin and Kayona; grandparents: Cindy and Larry Larsen; great-grandmother, Rogene Larsen; and many loving aunts, uncles and cousins. She was preceded in death by her brother and best friend, Domynick; grandparents, Lois and Donald Milis; and cousins, Jordan and Clint.

A visitation will be from 3:00 p.m. until a prayer service at 8:00 p.m. on Tuesday, January 12, 2021 at COMMUNITY CHURCH, 2351 Ryf Rd., Oshkosh. The visitation will continue at church on Wednesday, January 13, from 9:00 a.m. until the funeral service at 11:00 a.m. with Rev. Karl Kramer and Rev. Kristen Lowe officiating. Burial will be in Omro Cemetery. In lieu of flowers, memorials may be given to the family who will be establishing a scholarship fund. Online condolences may be expressed at www.omrofuneralhome.com.
Services will be streamed live at http://community-church.com/milis
Read Less

To send flowers to the family or plant a tree in memory of Danycka Rose Marie Milis, please visit our Heartfelt Sympathies Store.

Receive notifications about information and event scheduling for Danycka

We encourage you to share your most beloved memories of Danycka here, so that the family and other loved ones can always see it. You can upload cherished photographs, or share your favorite stories, and can even comment on those shared by others.

Posted Jan 12, 2021 at 11:56am
Sending love your way during this difficult time. Agape always, the Edgewood college cross country and track team.

Flowers were purchased for the family of Danycka Milis. Send Flowers

Posted Jan 08, 2021 at 10:47pm
Danycka was one of my closest friends at school for good reason. From the moment I began to know her at Mrs. Knapp's (I still like to refer to her as Ms. Meidl) debut 1st grade class at H.B Patch, I knew she was going to be someone I could trust. Not only did I think she was pretty with a lovely smile, but she had a cheery, friendly personality that I looked forward to seeing every day. Our friendship was further helped by the fact that she recognized the difficulties I had as someone growing up with autism, like my needs for alone time and helpers like Mrs. Wilson in the room and what I'd describe as an obsession with NASCAR and driver Jeff Gordon back in the day. Furthermore, she would always play Tornado Tag, a tag game I invented where ducking and covering would protect you, with me and some of my (and her) other friends at recess.

After a year away from her, I had the opportunity to choose which 3rd grade class I wanted to take special classes (art, music, gym, and technology with), and I chose Mrs. Dorheim's class purely because she was in her class. (I was in Mrs. Eklund's class normally.) I loved discussing our art projects (though I can't remember what they are), playing a song with the colorful boomwhackers for our spring concert, and playing games.

I had class with her normally for 4th grade with Mrs. Geracie. Mrs. Geracie was one of the first teachers I thought about once I heard about Danycka's passing because she shared Danycka's bubbly, affable personality that I loved. My favorite memory with Danycka from that year was forming a reading group with her and two other friends and calling our group the ironically-named Black Cats because the poster we made for it was colorful. We then read a book called My Louisiana Sky (if I remember right), but I don't remember the story well. I might read it again if I find it for nostalgia's sake.

I shared the room with her again for Mr. Levezow's 5th grade class. That year was unremarkable, but I remember her doing Indiana for the state project because she loved Michael Jackson's music back then and wanted to research his home state.

In middle school and high school, when Danycka and I had fewer classes together, our relationship wavered but we remained friends. From then on, we mostly saw each other as cross-country and track teammates. She brought a stuffed unicorn to nearly every cross-country meet, which is making me smile as I think about it. Running was what kept us close in our teen years even though we saw each other in class less often. Traveling to Terrell's Island for cross-country practice was very special because Danycka and her friends would ride on the bed of Coach Dobberstein's truck while I rode inside with him. I unfortunately don't remember what her favorite meets were. For track, the Deerfield meets were the highlights because everyone loved the meet's atmosphere: more than 15 teams competing until after 11 p.m. on a Friday night; there was no other meet like it.

Danycka supported me when I took on basketball for my junior year. I am sure she was on the bleachers for the JV games and was a part of the crowd that got ecstatic in the few times I scored. Being a basketball player herself, she always traveled to the boys' road games (when the girls didn't play the same night at least) to support the teams.

She was one of the many students who were happy for me when I was crowned prom king. She understood that I wasn't as socially outgoing as she and her friends were and knew that the honor meant a lot to me. When I complained that I wasn't a part of the homecoming court, she reminded me about my achievements from the spring.

Sadly, our time at school for our senior year was cut short due to the pandemic, so I never got to see her again. But she and Dom will always live on in my memory and this retrospective. I know I've rambled on more than Robert Plant here (that probably wasn't a good analogy because as far as I know Dom and Danycka weren't as keen on classic rock as I am), but I wanted to get out as much as I could. Their untimely deaths served as a cruel reminder for me to keep my friends close when I can.

To my fellow Omro Class of 2020 classmates reading this, know that I am thinking of you.

Man, I wish I could edit these. I tried to be as sensitive with my language as I could. Sending best wishes to the Millis and Larsen families.
TP

Beautiful tribute, Camden. Reading your memories made me think of Danycka's smile and her giving personality. I know she touched your life as she did many others.
TB

Brita, Megan, and Alexis purchased the Full Heart for the family of Danycka Milis. Send Flowers 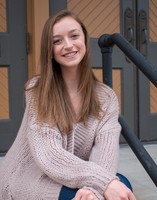