To share your memory on the wall of Gloria Bohn, sign in using one of the following options:

Gloria met her husband, Warren (Shorty) through his sister, Gloria. They married on May 28, 1960 at Grace Lutheran Church in Pickett, Gloria’s childhood church. Together they faithfully served God, one another, their family and their community.

Gloria was raised in the Christian faith, faith she passed on to her children and her children’s children. She also spiritually influenced dozens of youths at the Waukau United Methodist Church where she served as the Sunday School superintendent for many years.

Gloria served so many people and so many organizations faithfully. Not one for being in the spotlight, she preferred to work behind-the-scenes as a bookkeeper for the family business, as treasurer for the Waukau Youth Group, chair of the church memorials committee, and a long-time poll worker for the Town of Rushford.
Gloria served her family so very well, providing evening meals for Shorty at all hours of the evening as he arrived home after taking care of business, sewing clothes for her children and making them hot breakfasts every morning before they got on the school bus.

Monday nights were Gloria’s bowling nights, replete with tuna casserole with potato chips on top for the kids! It was fun to watch her bowl, with her famous “hip-hop” delivery before releasing the ball. She was quite the skilled bowler!

Gloria enjoyed visiting with other local women, whether it was preparing for community socials, collecting brightly colored lipstick samples from the Avon ladies or going door-to-door collecting money for the Community Fund. She was also the chief potato cook for the famous Waukau UM Church’s pork chop dinners.
Mom never missed her kids’ sports, band concerts and other school events. Most of all, though, Gloria loved to be at home and in her yard, enjoying her beautiful flowers and feeding her beloved birds, who kept her entertained right up until she left for heaven!

Gloria and her family wish to thank the selfless friends and caregivers who have been so faithful. Gloria never forgot those who were dear to her.

Gloria loved her three children and their spouses: Susan (Larry), Kim (Tim) Phillips, and Randy (Jodi). She is further survived by her beloved grandchildren, Elliott and Kelsey Phillips and Ryleigh Bohn. Gloria’s brother Lawrence (Shirley) survives. Further survived by in laws Betty, Loretta (Edson), Gloria (Mike) and Doug (Mary).
Gloria was predeceased by her husband of 58 years, Warren; her parents, William and Hazel; her mother- and father-in-law Laura and Warner, and her brother Donald Gallert. Also, in laws Don and Dolores Bohn and Melvin Wirth.

No formal service will be held. The family will hold a graveside interment on a lovely spring day when the birds are singing, and the lilacs are blooming.

Memorials may be sent to The Family of Gloria A. Bohn, c/o Kwiatkowski Funeral Home, 425 Jefferson Avenue, Omro, WI 54963. In remembrance of their strong Christian faith, donations will be made in honor of Gloria and Warren to Christian outreach efforts serving those most in need.

“Washed in the blood of Your sacrifice; Your blood flowed red and made me white; my dirty rags are purified, I am clean” ~ Natalie Grant
Read Less

Receive notifications about information and event scheduling for Gloria

There are no events scheduled. You can still show your support by sending flowers directly to the family, or planting a memorial tree in memory of Gloria Ann Bohn (Gallert).
Plant a Tree

We encourage you to share your most beloved memories of Gloria here, so that the family and other loved ones can always see it. You can upload cherished photographs, or share your favorite stories, and can even comment on those shared by others.

Posted Oct 18, 2020 at 09:40pm
Sorry for your loss. I smiled when I read her obituary because I remember the casseroles she would bring over to Grandpa Gallert's home when we came to visit. It was always nice to have a home made meal after the long drive from Washington state.
She was a devoted mother and wife. Our thoughts and prayers are with you at this time. 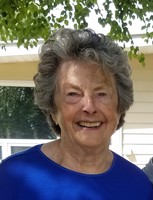